NABERS UK - a product of collaboration between NABERS Australia and the Better Buildings Partnership who developed the scheme, and the scheme administrator BRE - is an energy efficiency programme that enables asset owners, operators and managers to assess and improve the energy efficiency of the office buildings in their portfolio.

Timber Square is an ambitious new 370,000sq ft net zero carbon development located in the heart of Southwark, comprising two office buildings (one new, the other one retained and extended) plus ancillary retail/leisure uses.   The design has scored 5 stars following its Independent Design Review, meaning the project is on-track to receive a 5-star NABERS UK Energy Rating once in operation.

This level of energy efficiency aligns with the UKGBC’s 2025-2030 energy performance targets for commercial offices aiming to achieve net zero carbon in operation. Building Services engineers Hoare Lea worked closely with Architects Bennett’s Associates to optimise the energy performance of the facade, before developing an all-electric services solution, which was refined and optimised using advanced simulation during detailed design.

In addition to reducing operational energy use, the partial reuse of the existing structure of the Print Building and the use of a hybrid steel and Cross Laminated Timber (CLT) structure results in an embodied carbon intensity about half that of a typical London office, making Timber Square a truly net zero carbon development.

What is Design for Performance?

Design for Performance helps developers ensure the energy consumption of their projects deliver against their design intent and overcome the well-evidenced performance gap between design and operation. This is achieved by requiring project teams to target a NABERS UK Energy rating during the project design and verify it once the building is operational through the NABERS UK Energy for Offices rating scheme.

Since the launch of NABERS UK’s Design for Performance scheme in April 2021, alongside Landsec, major developers around the UK have registered to embark on their journey to bridging the UK’s Performance Gap and committing to designing, building and operating an energy efficient building.

The success of the scheme owes itself to the collaboration and investment of major players in the market, especially the Design for Performance Pioneers, who  make up the first projects in the UK to commit to a NABERS UK Target Rating. The NABERS UK Supporters have also played an important role through advocating Design for Performance to their clients and upskilling the market to have the necessary skills to deliver the approach.

How is the Target Rating determined?

The Design for Performance process requires developers to run advanced energy simulations to inform and test their design against a range of expected operation conditions to provide confidence that the performance target can be met. These modelled predictions will provide a reference point for value engineering considerations, commissioning, optimising and in-use monitoring once the building is occupied. Following collaboration with the project team, the Design Review Target Rating is determined by the Independent Design Reviewer who bases their estimation on the developer’s Energy Simulation Report and Rating Achievement Plan.

If you have an office development in the design or operational stage, head to the NABERS UK website to find out how to register your building for Design for Performance or Energy for Offices.

Jennifer Dudley, Product Manager at BRE: “Our congratulations to Timber Square! This is a fantastic achievement, and an exciting step for Design for Performance and the NABERS UK scheme. It’s great to see the collaborative efforts that have gone into the creation and operationalisation of NABERS UK to improve the performance of office buildings across the UK.”

Sarah Ratcliffe, CEO at the Better Buildings Partnership: "The announcement of Landsec's Timber Square being the UK's first DfP certified project marks an important milestone for our industry. NABERS UK has an important role to play in the transition to Net Zero. The Design for Performance framework is critical in ensuring that office developers committing to a NABERS UK Energy rating have the confidence that it can be delivered. Design for Performance pioneers have paved the way by taking action on performance-in-use and the success of Timber Square now provides the industry and those looking to adopt the DfP approach for future developments, a great case study on how this can be delivered in practice."

Jennie Colville, Head of Sustainability and ESG at Landsec said: “Designing to net zero, is crucial to developers and crucial for the built environment to reduce its contribution to climate change , but what’s also vital is that new schemes continue to meet their energy-reducing ambitions once they’re in operation. This is a brilliant accolade for our work at Timber Square and our carbon reduction targets, and we hope this will inspire many more net zero carbon schemes to come.”

Brian Graham, Director at Hoare Lea said: “As one of the first Design for Performance pioneer partners we’re delighted with this milestone for Timber Square. Designing projects that respond to the urgency of the climate crisis is at the forefront of our thinking. Embracing NABERS UK on Timber Square has provided a fantastic opportunity for the project team to collaborate and utilise modelling data to understand the carbon impact of every design decision.”

If you have a building in the design stages (upto Stage 5), and want to commit to improve it’s operations energy use by committing to a NABERS UK Rating, head to the NABERS UK website where you can find out more about the scheme and how to register. 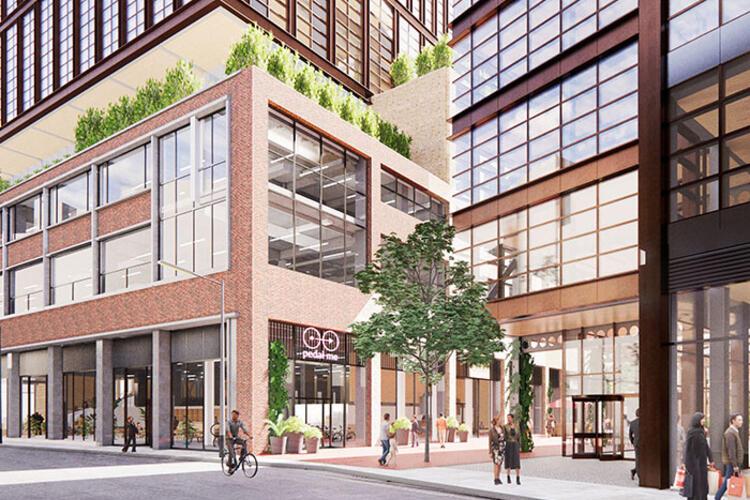