Aberdeen Asset Management has completed the installation of a 250 kWp solar PV (photovoltaic) array on an investment property within its UK portfolio. The industrial installation, comprising 1,000 solar panels, will provide renewable energy to occupier Biffa Waste Services, at a discount versus National Grid rates.

225,000 kWh of renewable electricity each year

Aberdeen Asset Management is a global investment management group. Through its energy management strategy, Aberdeen works closely with occupiers to help them reduce their CO2 emissions, improving energy efficiency and using low-carbon energy sources. Aberdeen funds the installation of PV on suitable assets, where it generates a reasonable risk-adjusted return on investment.

Aberdeen commissioned Syzygy Renewables to assess PV applicability across its UK property portfolio of around 800 properties. Syzygy identified a shortlist of properties where there were good opportunities for PV. These included a 16,720m² industrial property in Edmonton. This site is home to Biffa’s key waste recycling plant in London and has 20 years left to run on the lease.

Aberdeen appointed Syzygy to manage the Edmonton project, which included carrying out a detailed feasibility study, producing the technical specification and tendering the project. Syzygy continues to monitor and operate the facility on Aberdeen’s behalf.

Performance October 2015 to March 2016, when PV produces less power than in the summer:

How to get occupier agreement?

At Edmonton, Biffa had control of the roof space through an FRI (full repairing and insuring) lease. Aberdeen approached Biffa as part of its energy management strategy. Biffa responded positively to the PV project, as it supports the waste management firm’s commitment to high environmental standards, at the same time as delivering operational cost savings. There were no major barriers to the project for Biffa, as Aberdeen funded the capital costs and Syzygy provided a skeleton structure for lease amends, used on a number of similar projects, to minimise disruption to the lease. In addition, the installation was implemented without affecting site operations. Members of the Biffa team involved included Head of Property, Nick Barsby, who led the project for Biffa, and General Manager for Edmonton, David Heaton.

Every project is different and it is advisable for the team to include someone with experience of PV installations. At Edmonton, Aberdeen partnered with Syzygy, which has experience across around 200 projects, most of which were undertaken at live sites. Syzygy, Biffa and the contractor Solar Advanced Systems met regularly throughout the commissioning process. In addition to complying with Construction (Design and Management) Regulations, the team worked within Biffa’s health and safety requirements and Aberdeen’s insurance obligations, including using the SolarEdge DC-AC PV inverter, which offers best-in-class fire safety features. Commissioning and snagging took around a month, from starting on site to project completion.

How to ensure the occupier is accurately billed?

Where occupiers will be recharged for electricity, it is important to have a good monitoring platform to accurately identify what has been consumed. At Edmonton, in addition to a meter measuring what the PV panels are generating, a private export meter was installed alongside the occupier’s mains meter to allow live, and accurate measurement of what is being consumed. 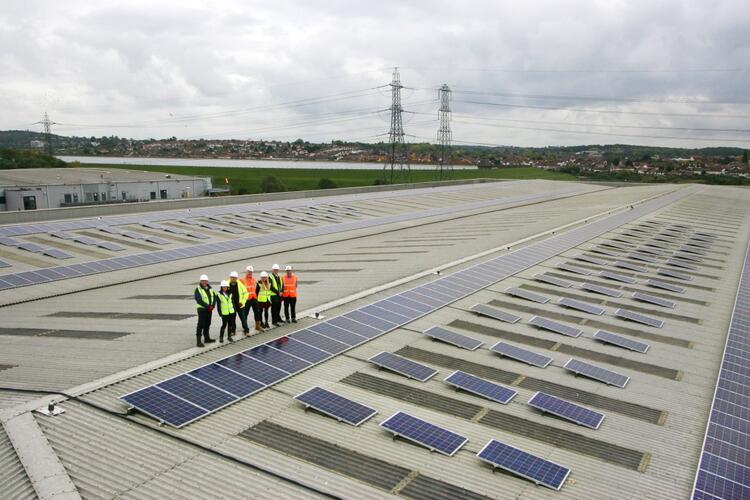 “This is a really important initiative and builds on the work that we have been doing for a number of years to improve the assets under our management. We see engaging with our occupiers in this way, as a win-win for both parties – an income for our underlying clients and lower energy costs for the occupier. We intend to continue to work both with Biffa and occupiers at our other sites on similar initiatives.”