As part of The Crown Estate’s ecological master plan for its holdings in Regent Street and St James’s, the organisation is creating a green corridor linking Regent's Park and St James's Park. Plans include green roofs, brown roofs, green walls, pocket habitats, community gardens, street trees, window boxes and planters, as well as bird boxes, bat boxes and bee hives. Through its estate-wide approach, The Crown Estate is creating valuable habitats for wildlife and improving the experience for people living, working and visiting the area. It will also kick start the 'Wild West End’, a unique collaboration by London property owners to promote green infrastructure in the capital, supported by the Mayor of London, the London Wildlife Trust and Arup.

Creating over a hectare of new green space

The Crown Estate is guided by its values in everything it does – commercialism, integrity and stewardship. For centuries, The Crown Estate has owned and carefully managed almost all of London’s Regent Street and around half of St James’s. To the north of The Crown Estate’s Central London portfolio lies Regent’s Park, and to the south west, Green Park and St James’s Park. This estate offers a unique opportunity to significantly enhance biodiversity, creating a green corridor that allows more species of flora and fauna to move through the urban fabric.

The Crown Estate partnered with Arup to develop an estate-wide approach to ecology, through a phase 1 habitat survey and an ecological master plan from 2013. Going beyond a plan for biodiversity on individual projects, this looked at opportunities across the entire estate, highlighting weaknesses in the green corridor, which The Crown Estate could improve. The plans will see the creation of over a hectare of new green space, equivalent to one and a third times the size of the football pitch at Wembley Stadium. As a result of all this, The Crown Estate’s ecological masterplan won the Chartered Institute of Ecology and Environmental Management’s Best Practice Award for Innovation 2015.

The creation of a green corridor linking Regent Street and St James’s historic buildings will enliven the surrounding public spaces for visitors, and boost the range of habitats available in this part of Central London so that wildlife can flourish alongside the millions of residents, workers and shoppers that visit the area each week. Ultimately, this will help The Crown Estate to deliver spaces where people want to work, shop, occupy and visit.

The environmental, social and commercial benefits of The Crown Estate’s approach are supported by numerous national and international studies:

Additional commercial benefits identified by The Crown Estate include:

How to make significant biodiversity contributions?

How to extend benefits?

In July 2015, The Crown Estate and other London property owners, Grosvenor Britain & Ireland, Shaftesbury, the Howard de Walden Estate and The Portland Estate, announced that they have formed a unique collaboration to promote green infrastructure in the capital, through an ecology project entitled 'Wild West End’. The project, the first city centre ecology project worldwide to be conceived and driven forward by an industry partnership of this sort, is also being supported by the Mayor of London and the London Wildlife Trust. Arup is providing technical advice and support to all the partners. Whilst The Crown Estate is set to kick start the Wild West End with its ecological master plan for Regent Street and St James’s, other West End property businesses are working on their own master plans to expand the project even further. Ultimately, the Wild West End will create an extensive network of green stepping stones which form connections between the large areas of parkland which are already key natural features of the overall environment in the West End.

How to integrate contextually valuable green infrastructure into existing buildings and spaces?

It tends to be easier to incorporate green infrastructure on new developments than to retrofit it to existing buildings and spaces. For instance, to install intensive green roofs on existing buildings, intrusive surveys may be needed to understand implications for structural loading. Due attention must also be given to buildings of heritage value, such as listed buildings and those in conservation areas. Other aspects that need consideration in retrofitting green infrastructure include health and safety, maintenance and insurance. Where intensive green roofs are not feasible, alternatives include extensive green roofs, which require a thinner layer of substrate, and pocket habitats. The Crown Estate will also integrate gardens at street level, as well as installing bird and bat boxes, beehives and green walls. 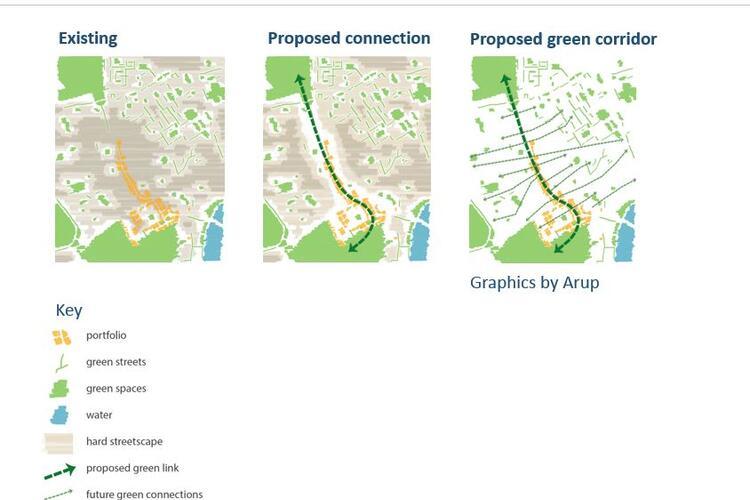 [iv] The value of public space

[viii] Greening for growth in Victoria 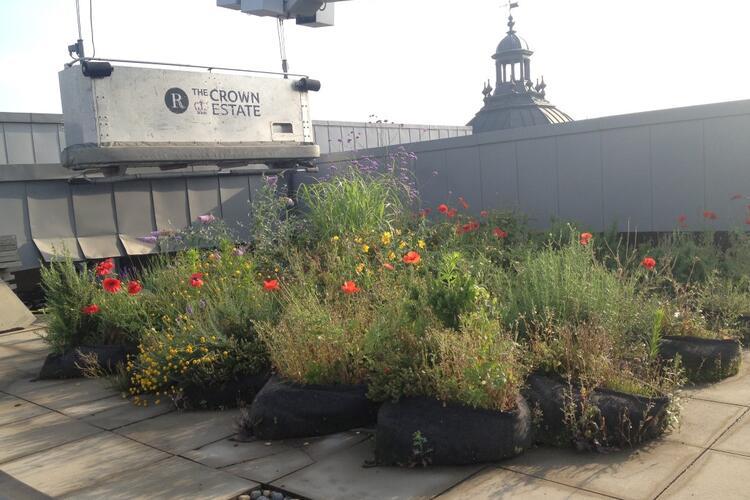 “With the trend towards urbanisation continuing across the world, it’s important for big property owners, businesses, government and charities to consider carefully their impact on plants, habitats and wildlife in major cities. That’s why we’ve launched the Wild West End. Along with our partners, we’re seeking to ensure that the millions of shoppers, workers and tourists that come to the West End’s densely packed urban environment each week, benefit from greater biodiversity by making space for the plants, birds and bees that form a crucial part of the ecosystem in London.”

James Cooksey, Head of Central London at The Crown Estate