Hammerson’s 130kW solar photovoltaic (PV) array at WestQuay started generating zero carbon electricity in September 2016. Building on the success of this PV retrofit, Hammerson is now looking at more opportunities to install PV on existing rooftops and car parks, as well as new developments, such as the adjacent Watermark.

Hammerson’s sustainability framework, Positive Places, aims to create retail destinations that deliver positive impacts economically, socially and environmentally. Targets include a 20% reduction in CO2 emissions by 2020 compared to 2015 and the installation of 2MW of renewable energy technology.

WestQuay shopping centre in Southampton was selected for the first retrofit installation. The 76,600m2 centre is jointly owned with GIC. Located on the South Coast, WestQuay enjoys relatively high solar irradiance levels. This contributed to the PV array meeting Hammerson’s internal investment threshold, despite the 2016 reduction in the Government’s Feed-in Tariffs.

Hammerson’s Environmental Manager led the project and kept all relevant stakeholders informed, including the centre management team. Syzygy Renewables carried out the detailed feasibility study, produced the technical specification and tendered the project on behalf of the joint owners. Contractor Solar Advanced Systems was appointed to install the panels and fulfil the ongoing operational and maintenance contract. Syzygy continues to monitor the facility to ensure maximum output, so any issues can be promptly flagged to the contractor and centre team.

The WestQuay centre management team coordinated the contractor throughout the installation, dealing with practical requirements, ensuring they understood their responsibilities and preventing any disruption for occupiers. The installation of 500 BenQ panels and SolarEdge inverters, which ran to time, took around four weeks. Each panel has a generation capacity of 260 watts.

Hammerson monitors exactly how much power is being produced via the generation meter. There is also a private export meter to secure Feed-in Tariffs.

How to deliver a PV retrofit to an operational centre?

Although Hammerson has experience incorporating PV into new developments, this was the team’s first experience retrofitting a PV array on an existing asset and so there was a learning curve. It is key that there is a committed champion for the project, driving it forward, ensuring that all the relevant parties are involved and overcoming the hurdles that arise. At WestQuay, Hammerson’s Environmental Manager engaged with a renewable energy consultancy to establish the financial case, advise on recharging electricity and claiming the Feed-in Tariff and project manage the installation, a structural engineer to test the load capacity of the roof, the centre management team to support the project on the ground and the contractor to install the panels and connect the system to the existing electrical infrastructure. The Environmental Manager worked closely with the Asset Management and asset’s financial controller to get the business case signed off internally. The Environmental Manager then engaged with the joint owner, GIC, to ensure they were satisfied with the technical proposals and business case, and to gain final approval from the JV Board. Financial, technological and logistical knowledge will be taken from WestQuay to future projects, potentially speeding up timeframes and achieving greater efficiencies.

How to overcome technical challenges?

The WestQuay roof was not subject to any overshadowing, which can often be an issue. However, there were other challenges. The roof is barrel vaulted and so it curves, which meant that the design of the array needed to get the right pitch to avoid the panels overshadowing each other. In addition, it is a standing seam roof and so the panels had to be fixed using approved clamps rather than drilled on, to avoid any impact on long-term roof integrity and warranties. Access to the lightweight aluminium roof also had to be precisely controlled for the safety of workers and structural capacity of the roof. The installation was carefully managed to avoid any disruption to occupiers and shoppers, e.g. shutting down the electrical infrastructure out-of-hours when connecting the array into the relevant distribution boards. A crane could not be used on the busy scheme, which meant that all the panels had to be put into a lift and carried up manually. The robustness of the panels was considered during the specification process, with coastal environments experiencing salt corrosion and seagull issues.

How to make the financial case for PV?

The WestQuay array met Hammerson’s internal investment threshold. There is a valuation benefit, represented by net income valued at scheme yield to enhance the capital value of the asset. Income is generated from the PV array by using the renewable electricity to power common areas and recharging it to occupiers via the service charge at the same rate as the National Grid electricity supplier. This delivers higher financial returns than exporting to the National Grid. In addition, whilst the 2016 change in the Government’s Feed-in Tariff reduced the returns on the project, the Feed-in Tariff still provides an income stream, further strengthening the business case for the project. PV panel prices have also dropped significantly in recent years, going some way to counteract the impact of reduced Feed-in Tariff. Although natural capital savings were not calculated at WestQuay, factoring the financial implications of reduced CO2 on society into a PV installation at Hammerson’s adjacent Watermark development showed improved payback from 11 to 9 years.

How to retrofit PV at more destinations?

Hammerson is now looking at more opportunities to install PV on existing rooftops and car parks, as well as new developments. The biggest physical barrier is often the amount of available space, as relatively large roof areas can be taken up with equipment and safe routes, limiting the size of the array. The same feasibility studies, approvals, discussions and negotiations are required whatever the system size, so, where roofs are small, cluttered or overshadowed, projects can be difficult to justify. However, UK roof space is significantly underutilised and the PV generation potential is large for Hammerson and other property owners. 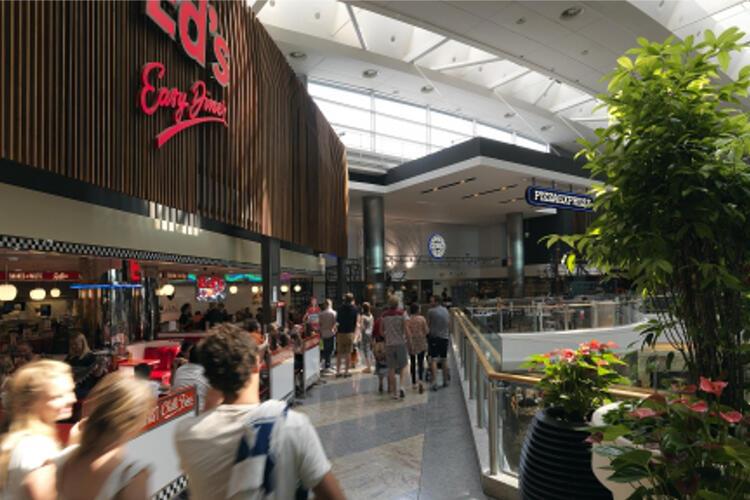