North Quay House in Bristol is the latest refurbishment by Legal & General Investment Management (LGIM) Real Assets to undergo a detailed lifecycle carbon assessment. This revealed that the project is on track to achieve embodied emissions well below industry targets, evidencing the carbon benefit of retaining and renewing existing structures rather than building new. Planned upgrades to the building fabric and systems will also substantially reduce operational emissions, accelerating progress to net zero carbon.

LGIM Real Assets is one of the UK’s largest investors in real estate. As a founding signatory to the BBP Climate Commitment, LGIM has pledged to achieve net zero carbon for its real estate platform by 2050 or sooner. It has set science-based targets to reduce operational carbon and energy intensity of landlord-controlled areas (Scope 1 & 2) by 60%, with science-based targets for embodied carbon and other Scope 3 emissions being finalised.

LGIM has been progressively carrying out lifecycle carbon studies on its developments since 2016, following the success of its first embodied carbon study at 245 Hammersmith Road in London. This identified interventions that reduced embodied emissions by over 10%, proving the value of considering carbon during design.

At North Quay House in Bristol, LGIM is completing a major refurbishment of an existing office building. This will add a four-storey extension, creating a double-height reception and increasing floor space. It will also involve the refurbishment of all existing internal areas, refurbishment of the external brick façade, new curtain walling and windows, and replacement of all mechanical and electrical services.

Drivers for net zero include the huge rise in interest in ESG from investors and occupiers, particularly around carbon and climate. There are also regulatory drivers, such as the UK Government’s 2050 carbon targets, Minimum Energy Efficiency Standard, Building Regulations and local planning requirements. In addition, occupiers are increasingly showing greater interest low carbon buildings.

As set out in LGIM Real Assets’ Sustainability Brief for Works, the project team at North Quay House is focusing on:

The team is also considering in-use embodied carbon, such as maintenance, repair and replacement emissions, and end of life carbon, including deconstruction and demolition.

LGIM appointed Method Consulting as a services engineer and embodied carbon advisor at North Quay House early on. Method Consulting completed a lifecycle carbon study, working with the architects Stride Treglown. They  used the common set of carbon definitions developed by the Whole Life Carbon Network (WLCN) with LETI and RIBA in 2021. These are outlined in Figure 1. 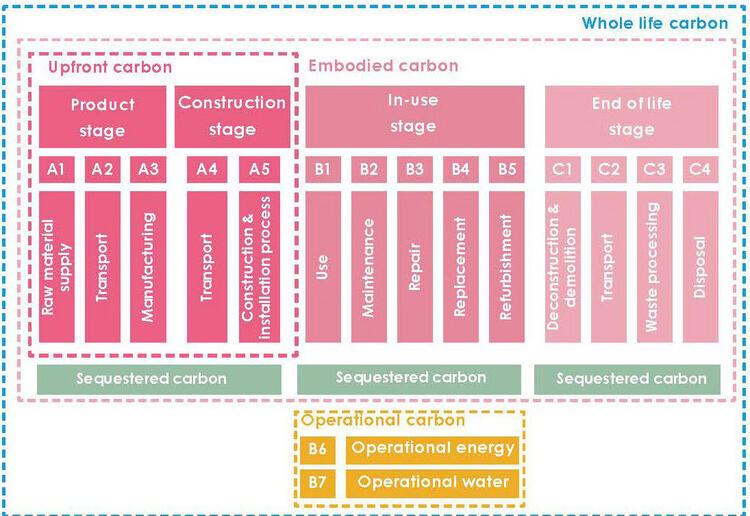 The North Quays House lifecycle carbon study estimated emissions and benchmarked performance against LETI and RIBA 2030 targets, as shown in Figure 2. The analysis will be rerun at project completion, using final construction data. 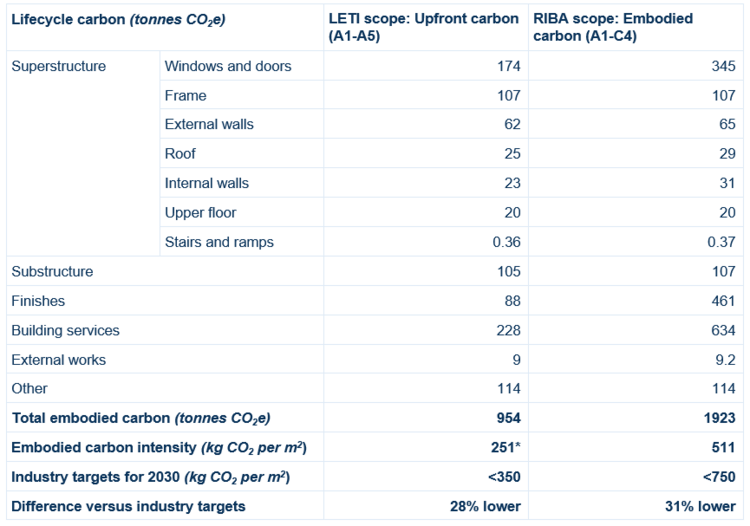 To optimise operational efficiency, LGIM Real Assets carries out much more extensive energy modelling at the design stage than Building Regulations require. At North Quay House, this includes Design for Performance analysis and CIBSE TM54 modelling. In addition to identifying opportunities to improve operational efficiency, as shown in Figure 4, this also sets a performance benchmark for the property team to target in running the building.

CIBSE TM54 modelling at North Quay House revealed that base building energy use intensity is ahead of 2030-35 UKGBC targets. LGIM is now working with the contractor to further reduce operational energy consumption, with the aim of achieving the 2035-50 UKGBC Paris Proof target. Occupier fit-out represents a large proportion of whole building energy use. As a speculative office development, there is a large degree of uncertainty in this prediction. LGIM will work with occupiers to minimise their impact on whole building energy use.

Undertaking a refurbishment, rather than a redevelopment, can deliver fantastic modern architecture and a Grade A office product, with the added benefit of significant cost and carbon savings.

The professional fees for sustainability and low carbon studies at North Quay House came to £60,000. Where there are costs to cut embodied and operational carbon, these are generally now treated as business as usual. One additional cost was £230,000 for openable aluminium timber hybrid windows, which saved approximately 38 tonnes of CO2.

How do you improve consistency of definitions to avoid comparing ‘apples with pears’?

LGIM Real Assets has been carrying out embodied carbon studies on development and refurbishment projects since 2016, progressively reaching smaller scale projects. Due to the high number of studies, they work with multiple partners, including Method Consulting, Cundalls, Hoare Lee and Hilson Moran. LGIM engages closely with these consultants to drive consistency, trying to ensure that everyone is talking the same language and using comparable methodologies. The new carbon definitions, published by the Whole Life Carbon Network, LETI and RIBA in May 2021, have helped to provide clarity. However, there is still further to go across the industry, both in standardising definitions and improving understanding of embodied carbon to drive change.

How do you balance operational and embodied carbon?

Traditionally, the carbon focus in real estate has been on operational efficiency. However, in making interventions to drive down operational carbon, there are often significant embodied impacts. For instance, if you increase insulation and change glass to drive down operational emissions, the carbon payback can be exceedingly long, due to the embodied impact. This is part of the reason why it is so important to look at whole life carbon. Currently, occupiers are particularly focused on operational carbon, in terms of their impact in occupying and running space. However, with rising interest in whole life carbon, focus on embodied emissions is likely to increase. As illustrated at North Quay House, LGIM is well positioned for this shift. 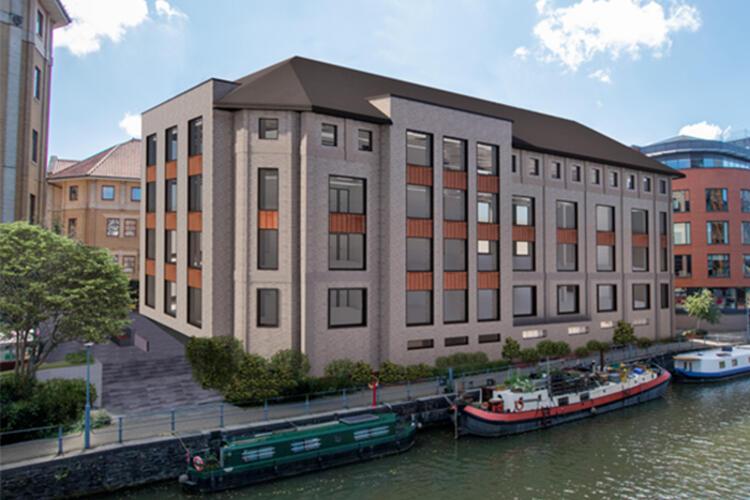 “We believe that, as building owners and operators, we have a central and urgent role to play in delivering the changes needed to drive down carbon emissions in the real estate sector. North Quay House in Bristol is our latest project to demonstrate the power of refurbishment to deliver embodied carbon savings versus redevelopment, while transforming operational efficiency.”