With a new Government, a new governmental department responsible for energy policy and climate change and an imminent review of business energy reporting on the horizon - could these seemingly turbulent times actually create a perfect storm whereby Government has the freedom to explore new and innovative ideas? It feels as if we have opportunity, now more than ever, to take a fresh look energy efficiency policy in the UK. And in doing so, I’d argue there are lessons to be learnt in looking abroad to some of the interesting developments around operational energy disclosure…

Nearly all will agree that commercial buildings consume more energy than they need to – through a combination of inefficient management and the materials / technology used to run them – and if the UK is to meet its climate change targets of an 80% reduction by 2050 then commercial buildings need to make their fair share of reductions.

In ensuring we manage to keep the lights on, the fact remains that it is much cheaper for buildings to reduce the amount of energy they consume than continually adding new generating capacity to an overstretched energy network. The recently disbanded DECC believe that by 2020 cost effective energy efficiency measures could save the equivalent amount of electricity as building 22 new power stations[1].

As a result, Government has long tried (and arguably failed) in their attempts to improve energy efficiency of the UK commercial building stock. Policy measures have ranged from taxes (Climate Change Levy), reporting frameworks (GHG Reporting, ESOS) to financial penalties and incentives (CRC EES, Energy Reduction Pilot). However, generally speaking, they have all failed to deliver the energy efficiency improvements at the scales originally intended.

Such policies have typically operated at a company level rather than building specific level. When policy has targeted individual buildings they have focused on the design aspects of a building e.g. Building Regulations and Energy Performance Certificates.

Many have discussed this topic at length and for a detailed review of the effectiveness of the Government carbon reduction and energy efficiency policies read the GPA Carbon Penalties and Incentives paper.

Within the sustainability community it has long been accepted that an equally, if not more, important, aspect than the design of a building, is how much energy it actually uses (its operational performance) and how it compares to its industry peers (benchmarking).

Indeed, there have long been calls from the industry for the mandatory disclosure of energy performance using Display Energy Certificates (the one Government policy which actually focuses on operational performance but is only required for public sector buildings). Again, many have discussed this topic and an excellent summary of the history of UK energy efficiency policy and the need for operational performance ratings is provided within the paper Mandating transparency about building energy performance in use.

Unfortunately such calls have fallen on deaf ears with the view from Government that there are clear drivers for the market to invest in energy efficiency and therefore there’s no need for their intervention. Whilst a fair argument, it’s one I do not agree with and feel is short sighted.

Within the BBP, our own work on monitoring and benchmarking energy consumption of our members’ UK portfolios through the Real Estate Environmental Benchmark has clearly demonstrated what can be achieved when owners understand and can compare the performance of their buildings. Over the past years alone the energy intensity of our members’ portfolio has reduced by 22% and the consistent set of buildings that have been reporting energy data over that period have reduced consumption by 20% (see more detail in our 5 year summary report).

However, whilst a great demonstration of what can be achieved, the savings made are only a fraction of what is needed from the wider UK commercial property market.

With COP21 and, dare I say it, BREXIT, I believe there’s an opportunity for the UK Government to take a lead on tackling climate change. In doing so, and particularly in the field of operational performance, it would make sense to look to other countries - most notably the US and Australia – where a number of lessons can be learnt.

Lessons from across the pond

Established in 1992 by the U.S. Environmental Protection Agency (EPA), ENERGY STAR Portfolio Manager is a free online tool which has transformed energy benchmarking in the US. Using the data supplied by the building owner, the software normalises a building’s energy use for weather, building type, occupancy, and other factors that affect energy consumption, allowing building owners to see how their property compares to like buildings on a level playing field. The scheme has been a great success with over 450,000 buildings covering +40bn m2 of space submitting data in 2015[2].

Evidence suggests that the simple act of energy benchmarking has led to direct reductions in energy use. A 2012 EPA analysis of 35,000 benchmarked buildings found average annual energy savings of 2.4%. In addition, those buildings which had benchmarked for three straight years saved an average of 7% over the course of that time and if that trend continued savings of 25% could be achieved by 2020[3]. Unfortunately, no more recent analysis has been conducted to determine whether that trend has continued.

A further benefit, built off the back of the success of Portfolio Manager, is that numerous US cities and states that have recently enacted energy disclosure and benchmarking policies in order to stimulate a building energy efficiency market.

To date, 15 U.S. cities, one county, and two states have instituted benchmarking and transparency policies for commercial and multifamily buildings. These are outlined in the figure below and a comparison matrix can be read here. 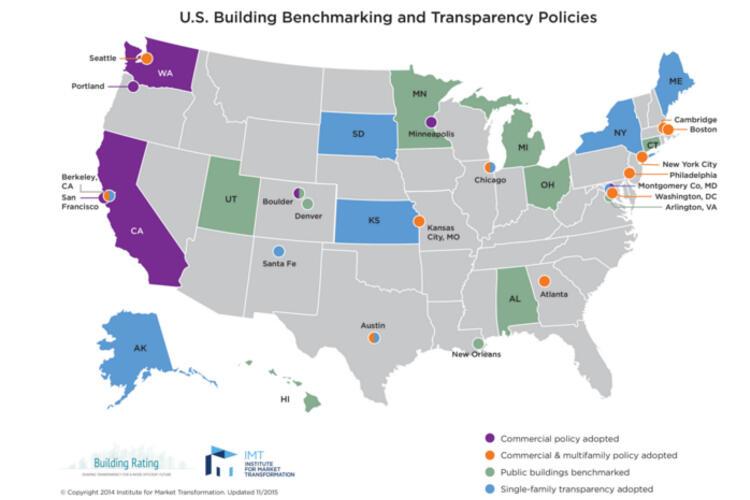 Most schemes are still in their infancy and are, unfortunately, somewhat slow at reporting trends, however, some positive results are starting to emerge:

It will be interesting to see over the coming years how the momentum builds and whether other cities and states also pass such energy disclosure policies and the subsequent success of those. For the UK, this is perhaps something to pay particular attention to in light of devolution discussions and the growing powers of regions and Mayors of major cities.

One shortfall so far is that the requirements do not provide owners with a comparable rating (unless they use Portfolio Manager) or address the split in consumption between what the owner has control over and what the occupier has control over – this is where we move to Australia.

Lessons from down under

In 1999, the Australian Office of New South Wales launched a voluntary operational rating system that measured and benchmarked the energy used by a landlord to service an office building. This a referred to as a base building rating. This was used by Government tenants as a way of specifying energy efficient office space through a simple 5 star scale (which has since been expanded to 7 stars due to its success).

Within a year this rating system became a national scheme and over time has developed into the, somewhat ironically named, NABERS (National Australian, Building Environmental Rating System) programme, and over the past 15 years has expand:

But more importantly, in 2010, the Australian Government’s Building Energy Efficiency Disclosure (BEED) Act 2010 made it a legal requirement for all commercial office buildings over 2,000 m2 (moving to 1,000 m2 from July 2017) to obtain and disclose a valid NABERS Energy base building or whole building rating at the point of sale or lease.

This piece of legislation has had a transformational impact on the energy performance of the office market:

Not only has it led to a reduction in energy consumption across the commercial office sector but has also managed to achieve the El Dorado of the sustainability world in linking operational performance to financial performance.

According to the September 2013 results of the IPD Green Property Index, buildings with a NABERS Energy rating deliver significantly higher returns than non-rated buildings or low rated buildings.

In addition, the NABERS scheme has also been able to feed in and support wider industry initiatives such as the Green Star rating scheme (Australia’s BREEAM equivalent), GRESB and the Climate Bonds Initiative Standard for Low Carbon Buildings.

Such success has led us to look at potential application of NABERS in the UK via the Design for Performance Project and Landlord Energy Rating Project.

Lessons for the UK

On a global scale there is momentum building around the use and benefit of mandatory operational disclosure and benchmarking schemes at a building level. The most successful by far is the Australian NABERS scheme, however, it will be interesting to see whether the foundations laid by Portfolio Manager continue to spring further policies across other US cities and states and the success they achieve.

When assessing such schemes I think there are a number of lessons that the UK Government should use to help inform future policy making:

There are also many more additional and indirect benefits which this blog hasn’t touched upon, such as supporting Government understanding to build further effective policies; incentivising an energy efficiency retrofit market and associated job creation, as well as the growing research linking the health and wellbeing benefits of more efficient buildings. The recent IMT report The Benefits of Benchmarking Buildings provides a much greater detailed assessment of this for those that are interested.

With a growing appreciation of the importance of operational performance and the recent political shake up, there is now a genuine opportunity for the UK Government to take a leading role in including mandatory operational disclosure and benchmarking schemes as a key component of future energy efficiency policy…. before we get left too far behind. 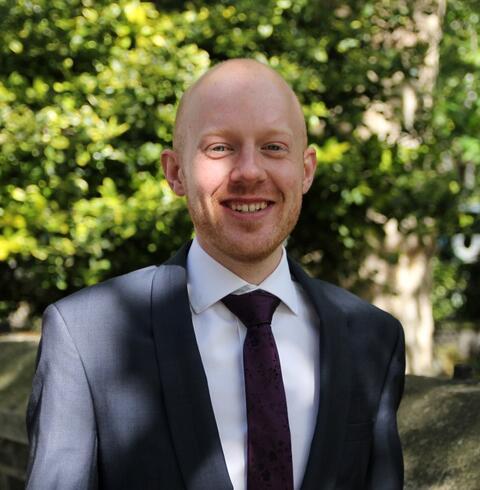