Sharing Best-Practise Across the Channel - BBP Meets its French Counterpart

On the 22nd of October the BBP received its French counterpart, the OID – Observatoire de l’Immobilier Durable – for the first episode of what we hope is the start to a strong cross channel collaboration.

The OID is an independent association based in Paris with mission to improve the sustainability of the French built environment, by impacting the way it is constructed, maintained and operated. Launched in 2012 to offer clarity and promote good practices in the real estate sector, they bring together private and public organisations involved in the process of constructing, maintaining and operating buildings.

We first met OID back in March this year when our common member – GE Capital Real Estate (which has since been bought out by Blackstone) – made the introduction. It was quite striking for us to discover such a similar organisation to the BBP, that operates on a near identical basis and focusses on many of the same challenges, had been set up in France. With that in mind it seemed like a great opportunity to provide an occasion for both BBP and OID members to exchange ideas and share best-practise.

After a couple of planning sessions to discuss how such an event could work, before we knew it the OID and its members had bought their tickets to London! Hammerson offered to host us in their new office at Kings Place, right next to Kings Cross station – very conveniently located right next to the Eurostar terminal.

The OID came along with a healthy group of nine, composed of the Secretariat, and their member representatives from La Française (an asset management firm), Altarea Cogedim (a property company who specialises in shopping centres), Société de la Tour Eiffel (a property company who specialises in offices), Green Affair (an engineering consultancy), and La Poste Immo (the real estate branch of the French postal service).

The BBP annually collects energy, water and waste data through its Real Estate Environmental Benchmark project and it was great to find another organisation who carries out a similar exercise and who values the importance of performance in- use as much as us.

In that respect, the OID have analysed data of around 5,400 buildings since they started in 2012. Their benchmark uses a series of subcategories, most notably classifying office buildings by year of construction. Essentially the performance of an office building is then only compared with the buildings built during the same decade. BBP members found this especially interesting as, so far, our own analysis has shown no correlation between energy use and building age.

What we also learnt was that the French Energy Performance Certificates (Diagnostic de Performance Energétique) differs to our own version as not only can it be based on the theoretical energy performance of the building but can also be based on the actual energy consumption of a building (based on invoice or meter data). Something the industry in the UK has long campaigned for!  It was equally interesting to note that, much like our own analysis, the OID have found no correlation between the theoretical EPC ratings and actual in-use EPC ratings.

The second topic was on our work with investors and lenders. We used the opportunity to talk about our work on real estate lending and our forthcoming Industry Insight Sustainability Bites? the impact of Minimum Energy Efficiency Standards for commercial real estate lending.  Working with the investor community has historically been a challenging aspect of BBP’s activity and we were keen to hear about the OID’s experience in how they engage with the asset owner community and their investment advisors. We also touched upon the BBP’s engagement with the Climate Bonds Initiative on the field of green bonds for real estate. This is a topic the BBP will be working on more closely in the coming years.

We closed the formal exchange on the theme of occupier engagement. Here we heard from the respective strategies of two OID members, starting with La Poste Immo. The entire French postal company operates under four different business units: standard mail, parcels, banking and post offices. The real estate business La Poste Immo owns 12,000 buildings and focuses on leasing out these assets to all four business units.

It was interesting to note that green leases are mandatory in France for every commercial building of more than 2,000 m2, and every tenant within one of these large buildings, irrespective of the size of the space let, has to subscribe to them. The green leases are appended as an environmental annex to the lease. This is strikingly different from the way they are used in the UK where, on a voluntary basis, they are simply included within the main body of the lease. The OID and the BBP members all felt that green leases were effectively meaningless unless both parties involved had a clear strategy for engagement and action with regard to the clauses. The OID members stated that there was a feeling that whilst mandatory in France, green leases perhaps weren’t having the desired level of impact the French policy makers had hoped for.

Another topic that sparked some discussion was building certification schemes. Building certification seems to be very popular in France as La Poste Immo has set about certifying their new developments, with either LEED, BREEAM or HQE (a specific French scheme), or all three. It was interesting to hear that the use of BREEAM-in use was growing in France, even for our own members’ French assets, yet the same isn’t being seen in the UK.

To conclude the meeting, Alterea Cogedim shared with us their energy management strategy in their shopping centres. For the last few years they have been trying to identify the energy consumption of their occupiers, which is a difficult exercise considering the owner is not responsible for buying the energy used in the retail parts of their assets. However, thanks to the green leases that they have in place, along with the yearly environmental management meetings they have with occupiers, they have managed to obtain most energy invoices paid by their occupiers. This has allowed them to make an accurate estimation of the energy used in the whole shopping centre, and support their occupiers in suggesting ways they can reduce their energy bills. Our members were particularly interested in this project as it is generally challenging for shopping centre owners to obtain occupier consumption data and to understand the total energy consumption of the building. 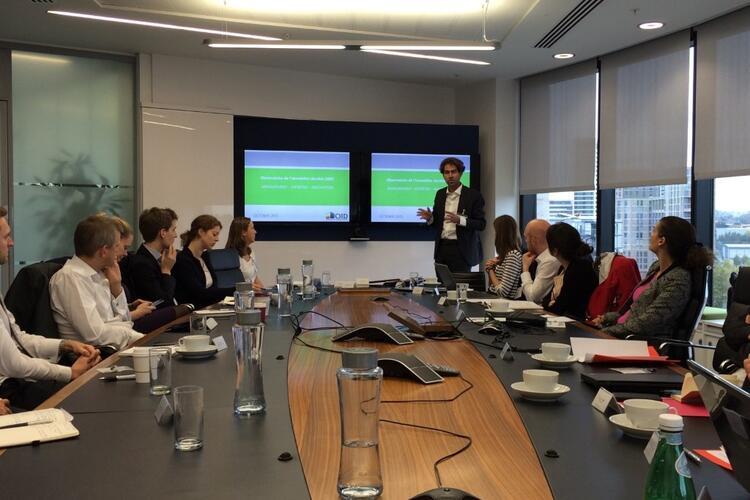 After lunch, the best-practise exchange continued just across the river at King's Cross development site. We were welcomed at their Marketing Suite by Lydia Dutton, Environmental Project Manager at Argent, the development manager. We heard all about the 67 acre mixed use development going on at King’s Cross including offices, retail, schools and residential buildings. Our French counterparts were especially curious about the energy that will be supplied through the energy centre and the photovoltaics to be installed on a number of buildings’ roofs.

Lydia showed us around the development. I personally really enjoyed the great transition between the industrial heritage, and the new build at the University of Arts. What an impressive atrium! Apart from the esthetic aspect of the development, what especially struck me was how well frequented the whole development site was. So far, they have really stood up to their promise of social inclusion. Students, residents, employees, senior citizens, and children were all sharing the space when we visited it.

When finishing our visit we learnt that only c.200 parking spaces for visitors are to be included in the whole development site. Considering the aim to provide working and living space for 45,000 people and you realise this is close to nothing. In light of the congestion issues seen in Paris, the members of the OID were rather appreciative of the foresight of Camden Council. The Council is doing its best to reduce the use of private cars within London, by limiting the amount of parking spaces available and increasing the facilities for bikes and shared transport strategies.

English-French communication was amazingly easy, and we even had the good surprise of discovering that several BBP members were more than happy to practise their French! Considering the success of the event, it looks like a similar visit of the BBP to Paris could be next on the agenda… 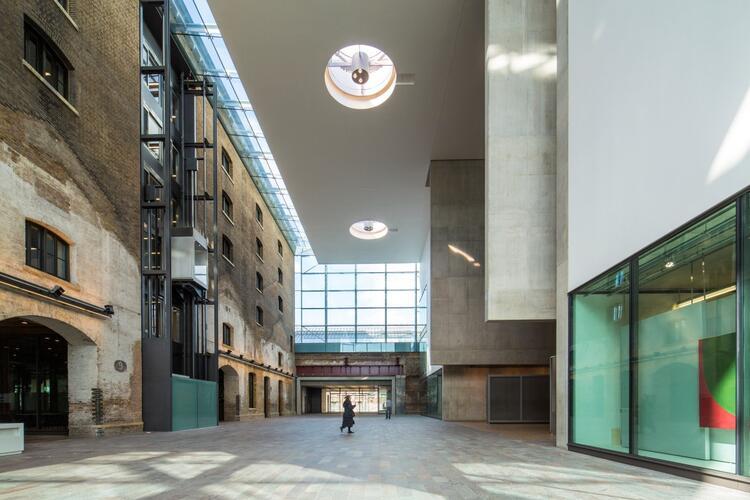 More photos of the event are available on the OID website here.