BBP Members Use Big Data to Improve Comfort and Efficiency

In most large commercial buildings, the internal environment is managed by a climate control system, otherwise known as a Heating, Ventilation and Air Conditioning (HVAC) system. This typically includes boilers, chillers and air handling units, controlled and monitored by a BMS. Plant is typically responding to hundreds of smaller devices, such as fan coil units, asking for hot or cold water or air.

It can be time consuming to identify faulty or incorrectly set devices, which may be affecting comfort levels for building users and resulting in wasted energy. Finding information to optimise building performance in a BMS can be like finding a needle in a haystack. Busy facilities management teams can default to responding reactively to occupier complaints, rather than proactively managing efficiency.

In 2013, Demand Logic launched a system that monitors thousands of HVAC and meter data points and finds the ones making excessive demands on the plant, causing comfort problems and wasting energy. A device fitted to the BMS sends data to Demand Logic’s cloud service, where software analyses it, producing live graphics and tables of equipment and building performance. Building managers can log on to see these graphics via a social media platform, sort information in tables, chat about the action required and take maintenance action to address anomalies.

Canary Wharf Group awarded Demand Logic a £50,000 Cognicity Challenge prize and the opportunity to implement its technology at Canary Wharf in 2015, as part of its smart cities accelerator programme for new technologies. 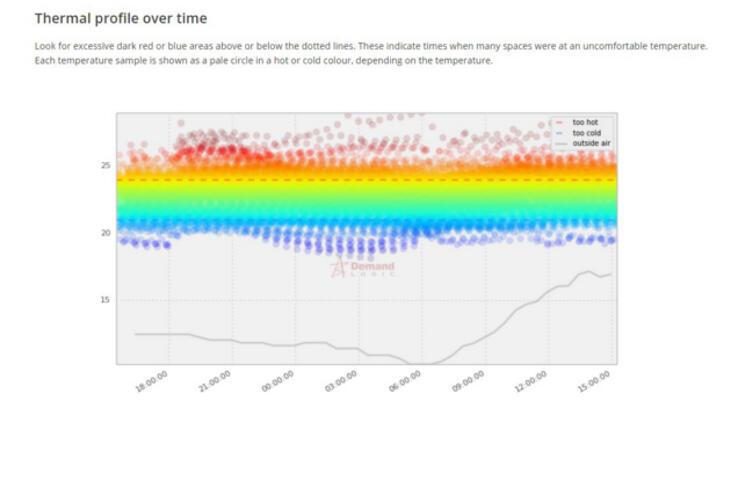 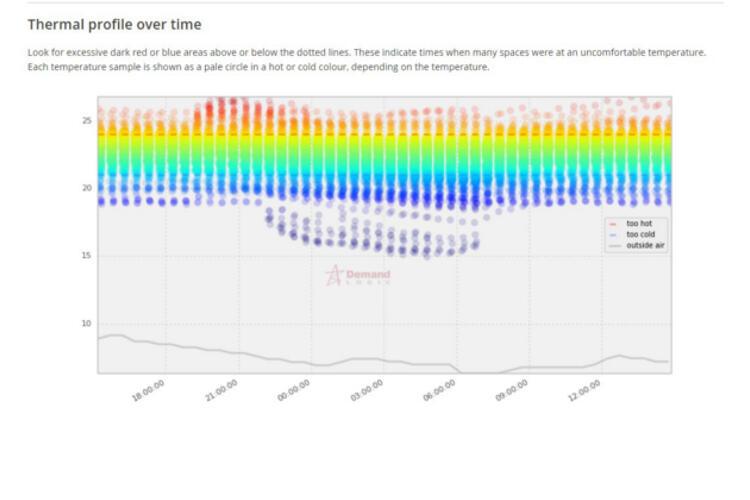 Land Securities uses Demand Logic across more than 232,200 m2 of office, retail and other space, after a successful pilot at Dashwood House, a 14,770m2 office building, contributed to around £100,000 of savings in the first year. 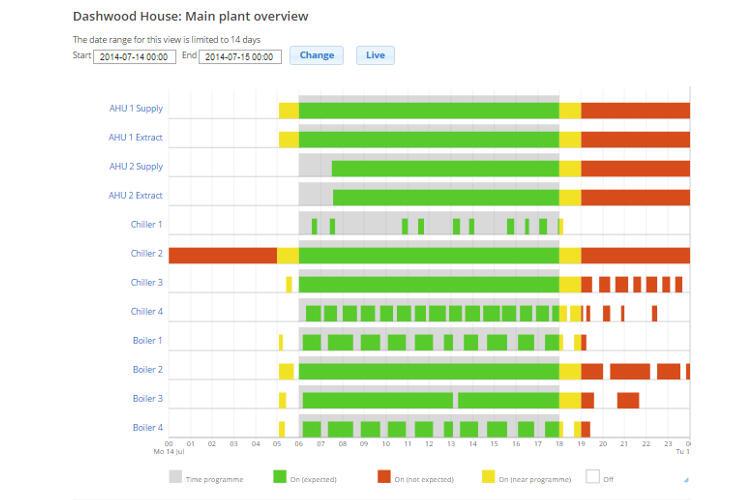 At 20 Fenchurch Street, a 63,900m2 joint venture development with Canary Wharf Group, Land Securities installed Demand Logic during fit-out commissioning, monitoring 175,000 data points in real time. This enabled the team to resolve issues more quickly, not only for the base building but also the fit-out works. For instance, when one occupier was experiencing problems during fit-out, the Demand Logic graphics showed clearly where there were spikes in consumption on their floor, which enabled the occupier’s fit-out team to focus quickly on rectifying the issue.

M&G Real Estate uses Demand Logic with CBRE at 3 Temple Quay a 13,720m2 office building, with more buildings being considered. 49 energy saving opportunities were identified in the first six months and those already implemented are delivering annual savings of £19,400 and cutting CO2 emissions by 260 tonnes, with further initiatives in the pipeline.

Fig. 3: This Major Plant Watchdog graphic for 3 Temple Quay identified boilers and chillers running at the same time (green) and boilers running out of hours (red), which the building team investigated and resolved. 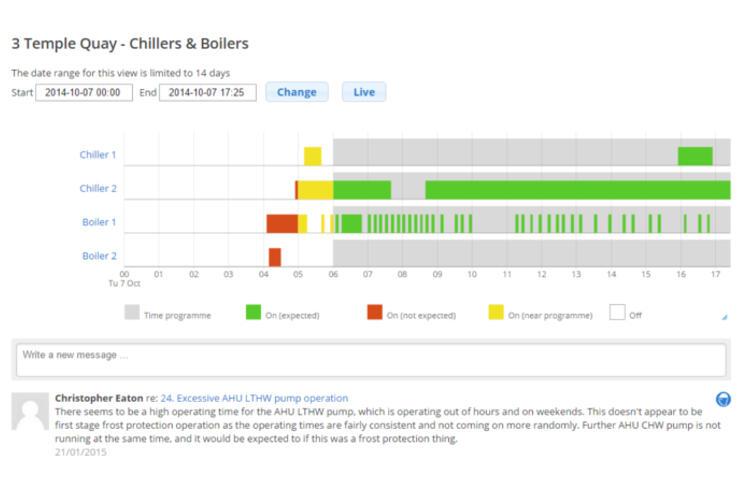 TH Real Estate used Demand Logic during the commissioning of The Steward Building, a 4,500m2 office development, to analyse 25,000 data points. 70 actions were flagged, with 45 resolved before practical completion and others further investigated, improving the commissioning process. Specific issues were identified on 20% of 136 chilled beams. Working with property manager Cushman & Wakefield, Demand Logic is now used in other TH Real Estate buildings, including 133 Houndsditch (18,580m2), where savings of up to £50,000 have been identified.

Fig. 4: This Major Plant Watchdog graphic for The Steward Building flagged air handling units running out of hours (red), which the building team investigated and resolved. 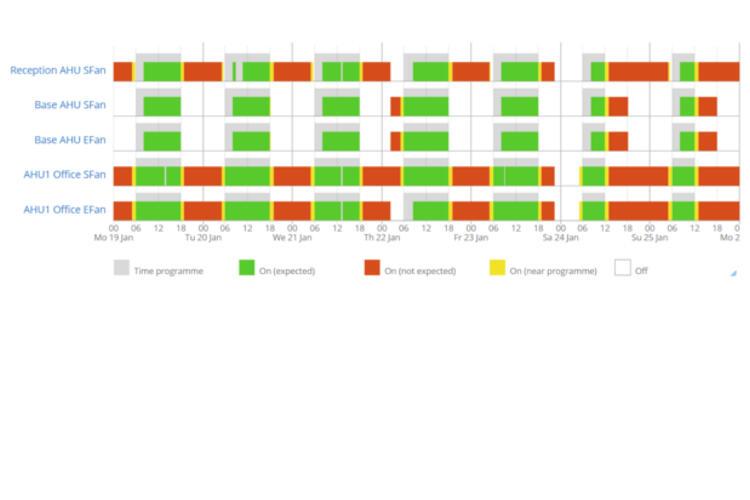 The Crown Estate is piloting the system with Regent Street Management Direct at 1 Vine Street (10,260m2) in 2016. To progress opportunities highlighted through the Demand Logic system, the team established roles from diagnostic through to resolution.You can download the Workflow Graphic here, as well as at the bottom of the page. 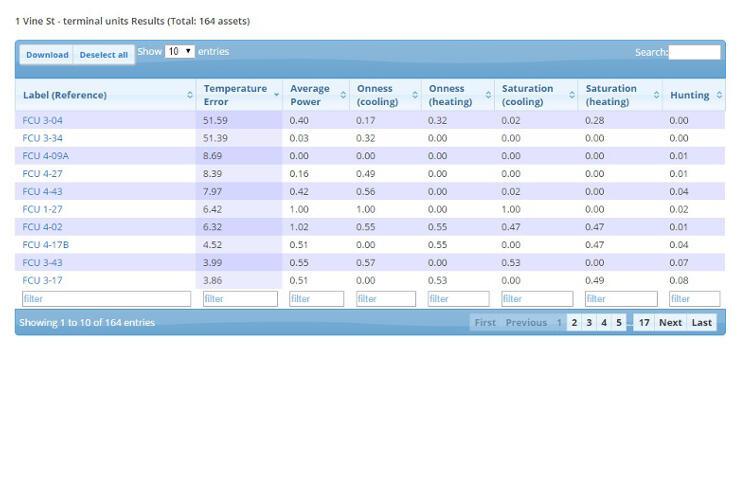 Transport for London uses Demand Logic across 98,000 m2 of office space. The system has helped improve interaction between engineering managers and service providers, as well as identifying faulty equipment, heating and cooling systems running out of hours and space being heated and cooled at the same time. Analysis from Demand Logic, immediacy of communications and user-friendly visualisation tools have made a real difference to building operations. 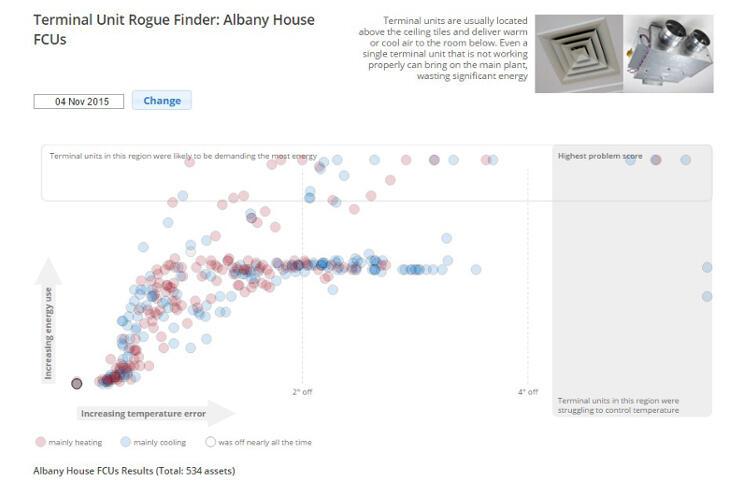 Maximising the use of BMS data which has helped:

How to work with different BMS systems?

After trialling Demand Logic on a Trend BMS, Land Securities was keen to use the system in other buildings, but initially the system was not compatible with BMS using the BACnet protocol, an open international standard used by major BMS manufacturers. This was addressed when Demand Logic secured Innovate UK funding, together with EDSL (Environmental Design Solutions Ltd), London South Bank University and sustainability consultancy Verco for a study that enabled Demand Logic to test and develop a BACnet communications protocol. Land Securities provided One New Change as a pilot building. This 52,300m2 building, combining commercial offices and retail space, is one of the largest BACnet sites in Europe. Through this study, Demand Logic has developed a BACnet version of its system, which is now used at sites in the UK and USA.

How to connect in energy meters that are not linked in to the BMS?

How to get contractors to use Demand Logic during commissioning?

When Land Securities started to fully understand the capabilities of the system, the team was keen to trial Demand Logic during the commissioning process. However, this proved challenging during initial attempts due to contractors’ resistance to accepting any new technology at a late stage in the process, where they believed it could affect their ability to meet the project programme. Now, Land Securities is writing this requirement into construction contracts early on to overcome this issue. TH Real Estate also wrote Demand Logic into commissioning contracts for The Steward Building, where the remote analysis improved the commissioning process, identifying snags in the HVAC control system, particularly errors in time schedules and terminal unit performance that would commonly only become apparent on occupancy of the building.

“It’s to everybody’s benefit to analyse BMS data, to identify opportunities to make buildings work better for the people based in them and operate more efficiently, which usually results in cost savings as well. Demand Logic puts the data in a format that’s easy for people to understand.”

Neil Pennell, Head of Engineering and Design at Land Securities